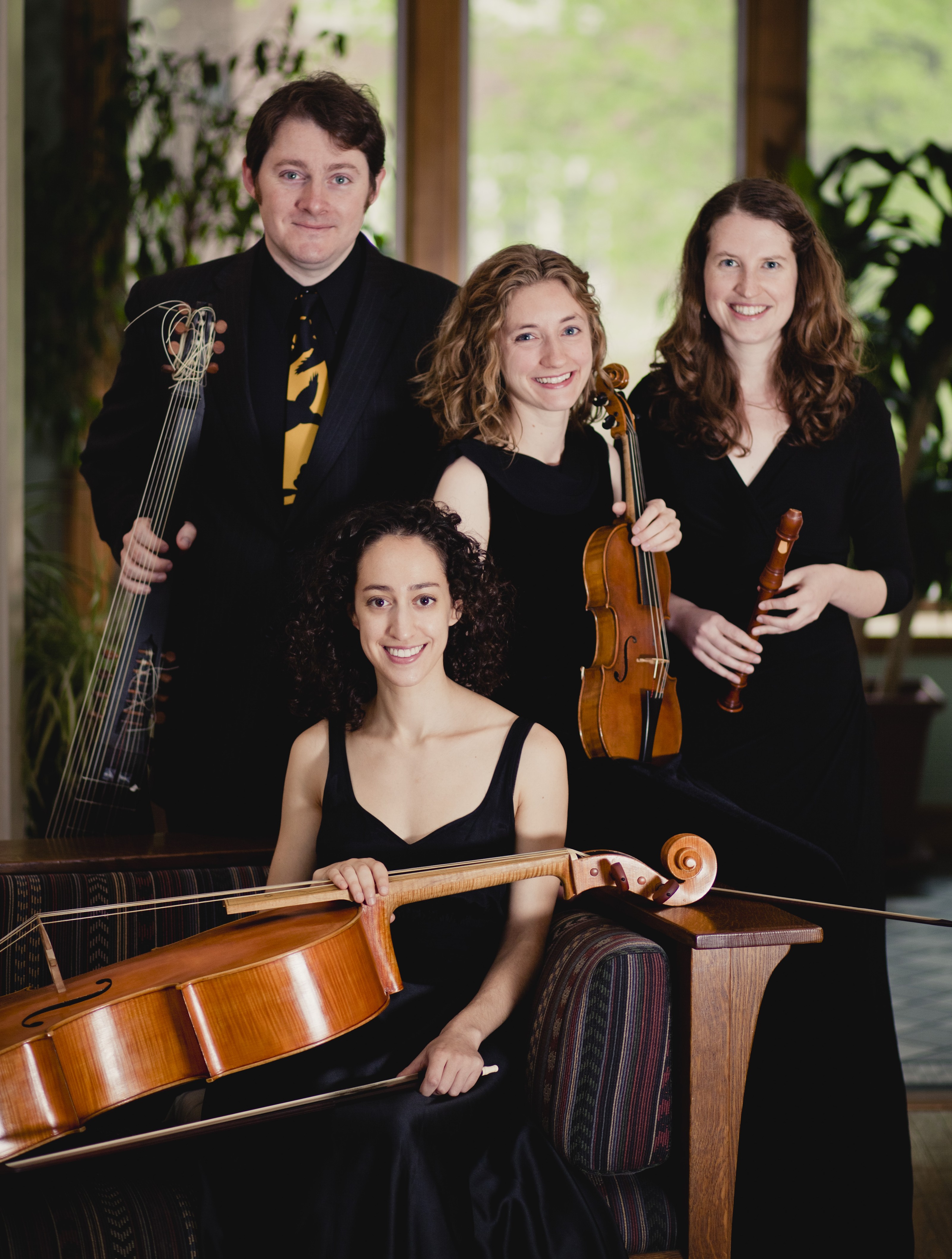 Since 2009, the early music ensemble Wayward Sisters has dazzled audiences across the United States, bringing “distinctive freshness” (Early Music Review) and intimacy to music from the seventeenth and eighteenth centuries.  “Wayward Sisters immediately impress with their evident rapport” (Gramophone).  The ensemble’s “polished and spirited playing,” and “alert, stylish performances” (Chicago Classical Review) have earned it appearances on concert series coast to coast.

In 2011, Wayward Sisters won the Early Music America/Naxos competition, a nationwide search for new early music talent.  In 2010, the Newberry Consort showcased Wayward Sisters on their series as Emerging Artists to watch.  The group’s debut CD was released on the Naxos label in March 2014.

The name “Wayward Sisters” refers not only to Henry Purcell’s vivid conjuring of Shakespeare’s witches, but to the group members’ far-flung lives and continuing commitment to making music together.

Praised for her "vitality and eloquent phrasing, as well as agility" (The Strad), Beth Wenstrom has performed as soloist and concertmaster with Trinity Wall Street Baroque Orchestra, New York Baroque Incorporated, Sebastian Chamber Players and Quodlibet Ensemble.  Beth is a founding member of Wayward Sisters, winner of the 2011 Early Music America/Naxos Competition as well as an original member of the “vital and vibrant” ensemble, ACRONYM (Classics Today.)  Beth also plays in the Boston Early Music Festival Orchestra, Apollo's Fire, Les Delices, Tenet, New York City’s Helicon, Carmel Bach Festival and loves recording with artists such as children's singer-songwriter Justin Roberts and film score composer Evan Wilson.
Beth serves as the string coach for the baroque ensemble at SUNY Stony Brook, and has coached baroque ensembles at Rutgers University.  She has become a recurring guest teacher at Oberlin Conservatory, teaching at BPI (Baroque Performance Institute at Oberlin) during the past two summers, as well as leading and coaching the conservatory's Oberlin Baroque Orchestra for the second time in 2019.

Anne Timberlake has appeared across the United States performing repertoire from Bach to twenty-first-century premieres to Celtic tunes. She holds degrees in recorder performance from Oberlin Conservatory, where she studied with Alison Melville, and Indiana University, where she studied with Eva Legene and won the 2007 Early Music Institute Concerto Competition. Critics have praised her "fine technique and stylishness," "unexpectedly rich lyricism" (Letter V), and "dazzling playing" (Chicago Classical Review).

Anne has received awards from the American Recorder Society and the National Foundation for the Advancement of the Arts, and was awarded a Fulbright Grant to study recorder performance in Belgium. With Musik Ekklesia, Anne has recorded for the Sono Luminus label.

Anne is a founding member of the ensemble Wayward Sisters, specializing in music of the early baroque. In 2011, Wayward Sisters won Early Music America's Naxos Recording Competition. In addition, The Newberry Consort presented Wayward Sisters as Emerging Artists during the 2010-2011 concert season.

Anna Steinhoff, cellist, has been described by critics as “soulful,” and “the rhythmic heart of the ensemble.” Based out of Chicago, Anna specializes in period instruments such as the baroque cello and viola da gamba. In addition to Wayward Sisters, she is a member of Second City Musick and the Haymarket Opera Company, and was the principal cellist of Chicago’s baroque orchestra, Baroque Band, until the end of its run in 2016. Anna performs with early music ensembles across the Midwest such as the Indianapolis Baroque Orchestra, Newberry Consort, Callipygian Players, Music of the Baroque, and Madison Bach Musicians. During the summers, Anna has the pleasure of being a part of the Staunton Music Festival and the Princeton Festival Baroque Orchestra, and has taught at the Madison Early Music Festival.

In addition to classical music, Anna has performed or recorded with an array of indie rock bands such as Saturday Looks Good To Me, Mysteries of Life, Frisbie, and children’s artist Justin Roberts.

Anna completed degrees in cello performance from the Oberlin Conservatory and Northwestern University where her principal teachers were Peter Rejto and Hans Jensen respectively. She has studied baroque cello privately in the Netherlands with Jaap ter Linden.

John Lenti's playing on theorbo, lute, archlute, and baroque guitar has been described as “a joy to behold” (Seattle Times) and praised for its “nuanced beauty and character” (Gramophone), and he regularly deploys his “uncommonly big sound” (Third Coast Digest) in concert, over the air, and on record to considerable acclaim as a soloist and chamber musician with groups like Seattle Baroque, Portland Baroque Orchestra, American Bach Soloists, Bach Collegium San Diego, Magnificat, Mercury Baroque, the New World Symphony, and Seraphic Fire, among many others. His recording credits include albums with Portland Baroque Orchestra and Seattle Baroque, Division with Ostraka, and forthcoming releases with Musica Pacifica and his baroque quartet, Wayward Sisters, winners of the Early Music America/Naxos recording competition. He studied lute with Nigel North, Jacob Heringman, and Elizabeth Kenny, and he is a graduate of the North Carolina School of the Arts and Indiana University. Additional musical help and inspiration have come from Ricardo Cobo, Ronn McFarlane, and Walter Gray.